Is The Lucktastic App A Scam?

Lucktastic Review
Website: Lucktastic.com
Co-founders:
Been around since: 2014
Price: Free to join and play
Overall Ranking: 10/100

Are you feeling lucky?

If so, Lucktastic is one of the many mobile phone apps out there like Shopkick that give you the chance to win big cash prizes and reward points known as ‘tokens' you can redeem for gift cards.

Getting paid to play games and have fun sounds perfect! But are the big prize winners and promises of easy winning just a rouse to cover up the Lucktastic app scam?

Though your chances of actually winning are infinitely small, I think the Lucktastic app can be a legit way to whittle down the hours and have a little fun.

If you're just looking for an easy way to pass the time and aren't really expecting to make any money, then I think you'll like the Lucktastic app.

Because seriously, you're not going to make any real money with this. Heck, it'll take you a good few months before you'll be able to redeem a $5 Amazon gift card.

The Lucktastic app has been downloaded over 10 million times since 2014 and they've paid out just $3 million in prizes and rewards… which means the average player makes just $0.33.

That's hardly life changing is it?

If you are looking for a real way to pay the bills and change your financial situation then this isn't it.

If you're ready to start making a real income online then go ahead and check out my top recommended make money online program.

It's where I learned how to create online profitable businesses that generate $6,000+ a month for me around the clock. If you follow the training and put in the work, there's no reason you can't do the same. Click below to find out more.

What we'll cover in the Lucktastic App review:

What is Lucktastic, exactly?

The Lucktastic App is one of the most popular apps developed and owned by Jump Ramp Games.

Lucktastic can be easily downloaded for free from the Google Play Store for smartphones and iTunes for Apple devices.

Right now it's only available in the United States and you must be at least 13 years of age to play.

The app basically gives you a chance of winning rewards (and ocassional cash prizes) through scratch card competitions.

Lucktastic have proven to massively popular with over 10 million downloads and 380,000 Twitter followers it looks like there's a lot of people with a lot of time on their hands… 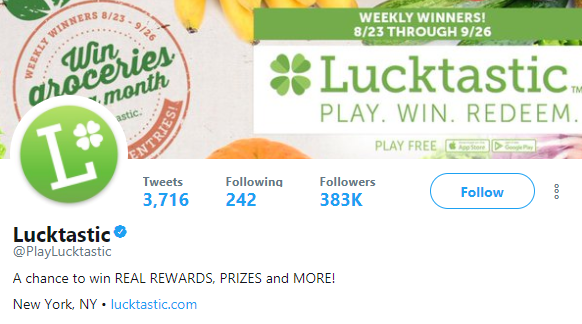 Think of it like a normal scratchcard but online and you don't have to pay, just find 3 matching symbols to win.

Some of them offer $1,000 prizes, others $10,000. Lucktastic.com is full of featured cash winners usually winning gift cards or tokens.

The app also rewards you for playing daily.

For example, to unlock your chance at winning the $5,000.00 scratchcard just play at least one scratch card a day for 4 consecutive days.

Take a look at a live demonstration here:

There are four main ways to earn points or cash:

This is the bread and butter of Lucktastic.

After every video you'll be presented with a new scratchcard and a chance of winning.

If you don't win you'll still earn some tokens. Keep reading and you'll see these tokens really aren't worth much at all.

You can earn tokens simply for logging in on the app every day for a consecutive number of days.

On day 5 you become eligible for daily mystery rewards which are usually entries into a sweepstake.

A lot of people sign in every for 4 days, then miss a day and start the above process again.

If you want to you can use your tokens to enter sweepstakes to try and earn more tokens or even cash prizes but the chances of you winning are few and far between and because winners are randomly chosen.

Lucktastic can't even tell you what your chances of winning are because it purely down to the number of participants playing any one game.

And finally, when you're in the app, click on the four-leafed clover and you'll see a range of easy tasks you can complete and earn more rewards like taking a survey or installing an app on your phone.

The number of tokens you can earn depends on how big the task is.

You could take a 14 minute survey for 28 tokens or a quicker 6 minute one to get 14 tokens. 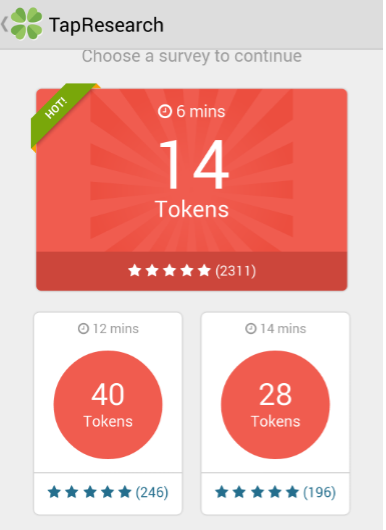 How much ‘money' can you actually win?

If you're using the Lucktastic app as a way to make money then it's important to know how much, realistically you can win, right? I mean that's probably why downloaded the app in the first place.

I downloaded the app 3 months ago and played every single day for about 20 minutes.

Sounds like a lot of tokens right? But how much are the tokens actually worth?

Well, that depends on the gift card you choose to redeem them but to guve you a general idea, a $50 Amazon gift card is 75,000 tokens. I guess I'll have to spend 20 minutes a day for another month to reach that…

I think you need to collect so many tokens before you can redeem them for anything worthwhile that most people quit the Lucktastic app before ever getting close to these numbers. 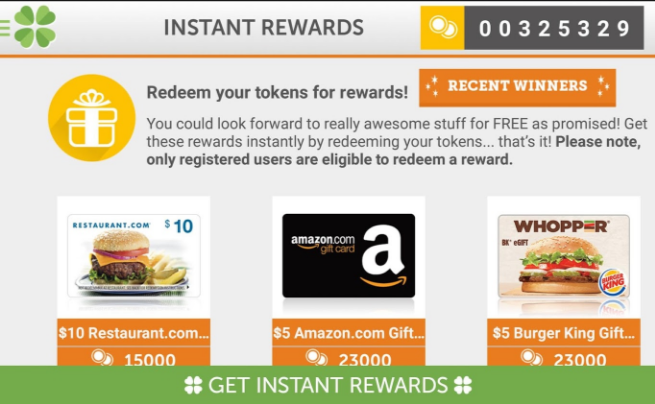 I think the only way this app can be worth your time is if you strike it lucky with one of the big cash prize scratchcards, but you're going to have to depend on luck because winners are automatically picked at random.

On the Lucktastic website you'll see big cash prize winners who have won up to $5,000. I will say these look legit to me but we have no way of knowing for sure.

10 million people have downloaded the Lucktastic app and a tiny fraction of those have ever gone to win more than $10.

Most people get drawn in on the promise of easy winning and possible fortune, then realise they're getting nowhere fast but they keep playing anyway… 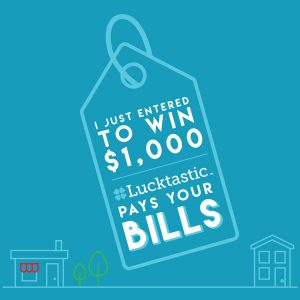 Will you make money with Lucktastic? No, but for most people they just want to play and the adrenaline rush of “the possibility” of winning is enough for them.

Lucktastic has been download 250,000+ times and boasts a Google Play rating of 4.1 stars.

The vast majority of users seem happy with the app but from reading the Lucktastic reviews, the most common complaints are never winning anything, having to watch long ads and issues and bugs with the app.

By far the most common complaint was that Lucktastic took a lot of time for very little reward. There are A LOT  of reviews from people saying the Lucktastic app is a waste of time and I can't say I disagree. 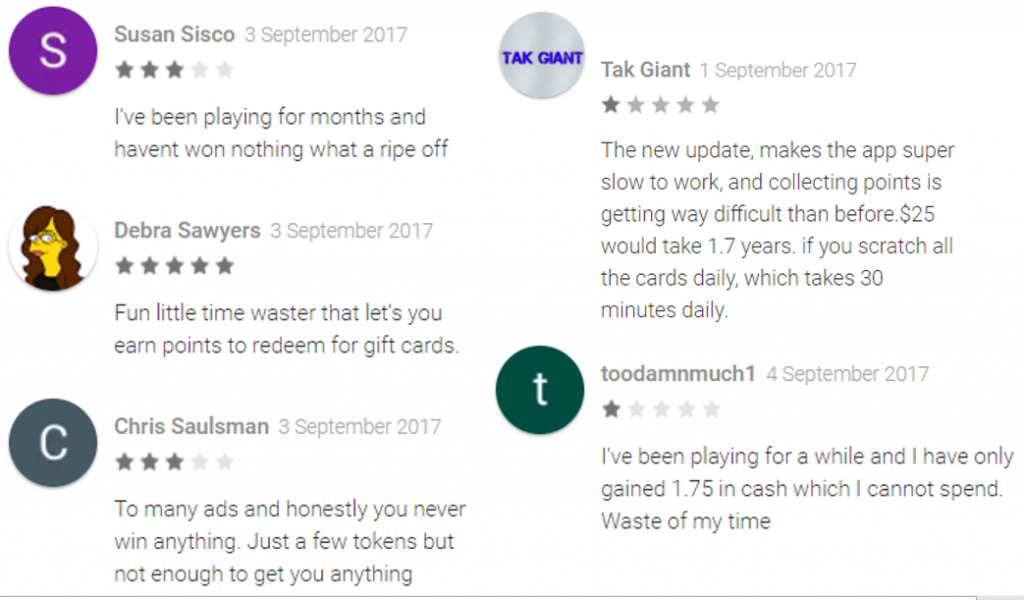 Is the Lucktastic App a scam?

I wouldn’t call Lucktastic a scam but for me it's definitely a waste of time and I will be uninstalling it.

It's a free app so you have nothing to lose but your time but for me, my time is worth way more than this.

Lucktastic makes money from advterising which is why they make you watch ads before you can play so it's in their best interests to draw new users in by saying things like: “You can win up to $5,000!”

Ocassionally they might pay out but this would be a tiny fraction of the money they're making from big advertising companies looking to get their business in front of people's faces.

After playing for a few months I only ever won $1.25 my first ever game and it's been tokens ever since. This isn't luck, but rather a deliberate ploy from Lucktastic to make you think you can win serious money and get you hooked on the app.

From my own experience and after reading countless other user reviews, nearly everyone can win $1 very easily but getting to the minimum withdrawal amount of $10 is impossible.

It's not just me saying this either, check out this video and you'll see what I mean…

If you just want to pass the time when you're waiting for the bus, I think you'll like Lucktastic, but if you're someone who is looking for real ways to earn money online you're going to get frustrated.

To quote Lucktastic's slogan: “Luck is fantastic” – but the truth is the harder you work the luckier you become.

I've been extremely lucky because I've found an online training course that taught me how to make $6,000+ a month.

And no, it's not by chance, there's no roll of the dice, no playing scratchcards and hoping for the best.  If you're ready to learn a legit way of making money online then click the button below and check out my top-rated training program.

I believe that anyone with the right know-how and support can be successful online.

So why not take the time you'd otherwise be spending playing games on your phone and use it to build a real online business for yourself? The best part? It's completely free to get started!

Have you downloaded the Lucktastic App? Did it work? How much money did you make and how long did it take you?

Let us know your experience in the comments below.

2 thoughts on “Is The Lucktastic App A Scam?”